Our walk was In Aid of MK ACT 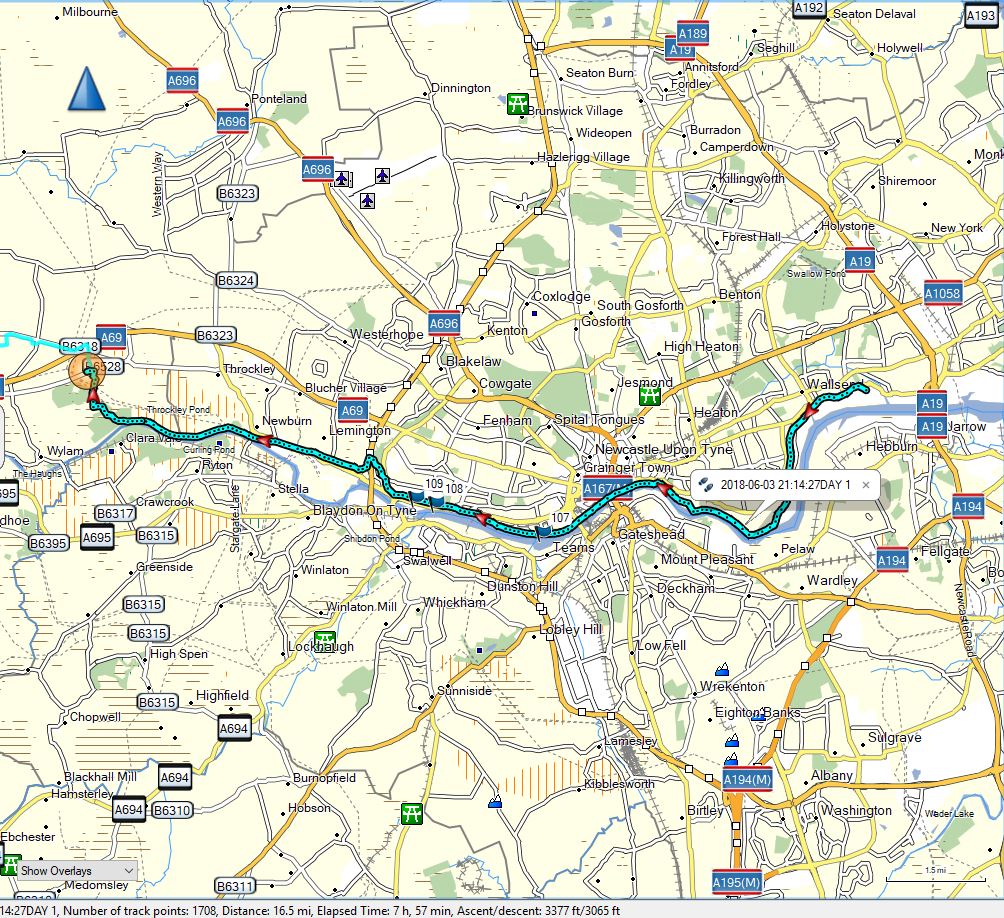 ​After staying at a hotel overnight Martin and I parked the car at Wallsend and started the walk.
We were carrying Bergan’s which weighed over 20 lbs each. This was later to play a part in our downfall. The weather was overcast with fine rain but was lovely walking weather.
As we arrived at the Millennium Bridge in Newcastle we came upon members from the Provincial Grand Lodge of Northumberland who were taking part in the Lifelites challenge and had presented a cheque to the charity.
We stopped and after introductions, I mentioned that Lifelites were meeting our PGM John Clark at Bletchley Park on the following Wednesday.
We had a chat with the Northumbrian APGM Brian Denton and Simone Enefer-Doy from the Lifelites Charity and I took a photo with Martin and those attending the event. After warm goodbyes, we continued our walk.
Being that it was our first day we tried to set our pace for the journey.
After nearly 8 hours walking we arrived at our accommodation for the night which was a bunkhouse.
Once showered it was off to the local pub, the Swan for a pie and a pint.
We were in our bunks for about 21.30 and dropped off into a deep sleep.
This first leg was mainly along decent footpaths apart from walking through woods in a golf course near the end of the walk, we were wondering what the morning would bring. 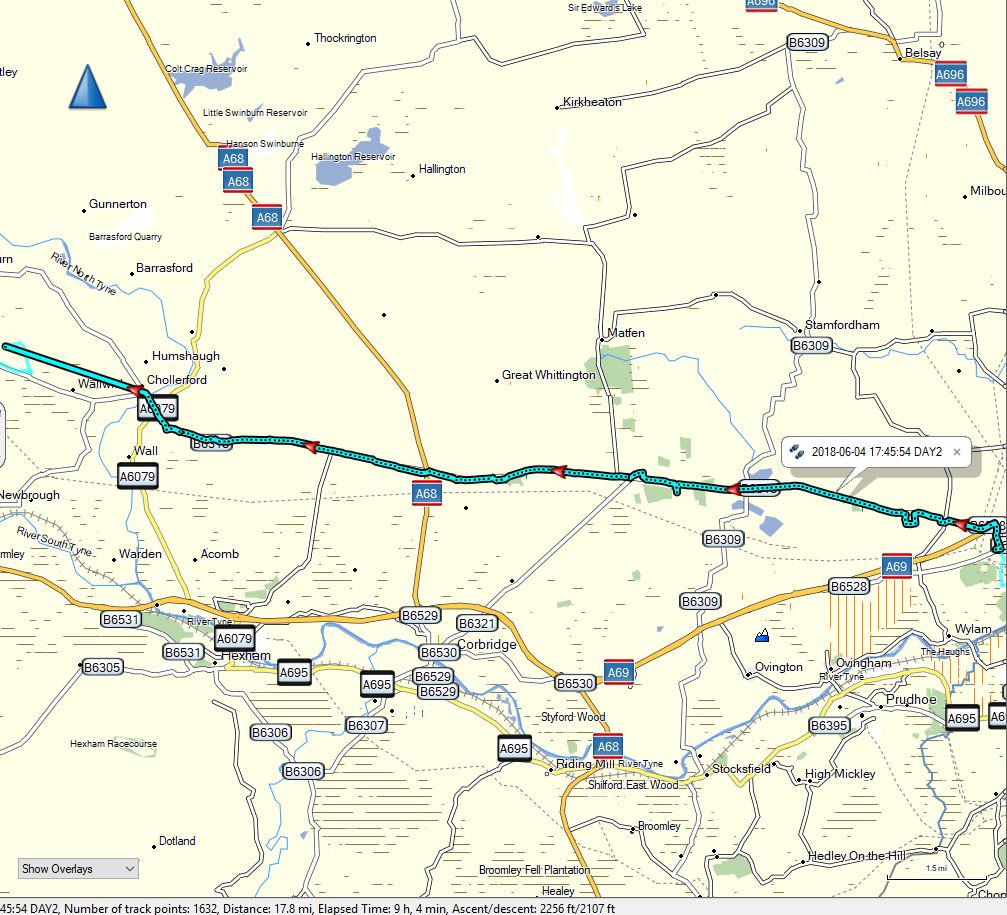 we​During a breakfast of bread, Jam and croissant (well it was a Bunkhouse, not a 5-star hotel) we were talking to some young lads who were surprised we were carrying Burgan’s as theirs were being transported.
Undeterred we started our day’s walk. We were following the signs along Hadrian’s way.
The walk is well signposted and Martin had a guidebook map to follow which was very good.
After a while, we were following the map along a path through a field towards some cows.
Cows didn’t bother me until then, a big black cow started to get a bit noisy as we got near.
I shouted at it to go away and waved my arms at it, that was a big mistake as half a ton of cow running at you is to, say the least a bit of a concern.
Despite the weight we were carrying we made it up a hill at the side of the field very quickly.
It seemed that every time we were talking to walkers who were going our way, the first question was “Did you get chased by that black cow”.
If it ever ends up as a beef burger, I’m first in the queue to try one!

During the morning we past the young lads who were just carrying light daysacks and set up quite a pace.
After stopping at the Vallum Farm Tea rooms for sandwiches in Matfen we started our walk again.
We were still walking through fields with gates and it wasn’t too much of an issue.
As the day wore on the gates changed to stiles which were the height of step ladders, some fields had 3 or 4 of these.
When you got to the top it was a matter of turning round balancing the weight of the Bergan and climbing down the other side.
​ I think this is where I received my first injury as by late afternoon the top of my leg was getting painful and I started taking ibuprofen . After walking for a while it started to ease up.
We both started to suspect we had blisters but just kept going.
By round 17:00 we arrived at Greencarts farm which was the bunkhouse accommodation overnight.
I took off my boots and had some unburst blisters on my middle toes.
Poor Martin had bigger problems he had a large blister which had burst and looked painful.
During the evening we were talking to a couple of walkers who had started from Carlisle so had passed through the route we were taking the next day.
They said the walk was through a hilly countryside with spectacular views and it was a tough walk.
So it was early to bed with that on our minds. 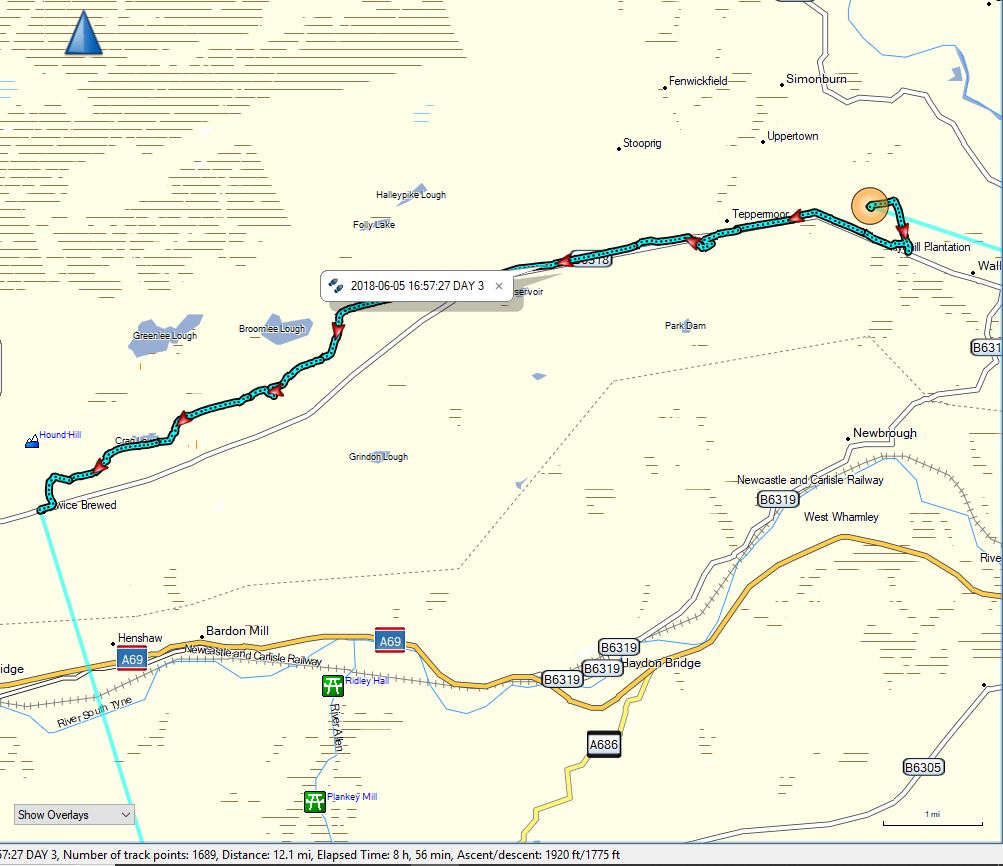 We started the morning with bread and jam again. It was a lovely sunny day and we wanted to get going.
After about a mile my groin strain started to kick-in and so back on the painkillers.
Most of the morning was over flat fields. We were making really good time and set a good pace.
By early afternoon we started climbing into the hills.
The views were amazing.
On our left were fields which dropped into a gentle valley whilst on the other side of the wall was a sheer drop.
Ahead to could see the wall undulating into the distance.
We would walk for ages then look back at a landmark and couldn’t believe how far behind us it was.
Not only was the route hilly but going down the hill could be very treacherous as they were very steep.
At some points, if you judged it badly it could be quite a drop over the edge.
Towards the end of the afternoon with only a couple of miles to go my groin strain kicked in with no warning. We were walking through a wood with a difficult walk on stones which climbed steeply.
I tried to carry on walking but it was the kind of pain that catches the back of your throat.
I had to take off my Bergan and take a couple of ibuprofen.
Martin waited patiently for me to get going and was getting a bit worried as we were a long way from help.
He suggested that I take some paracetamol as well.
After a few minutes, I was able to carry on although still feeling uncomfortable.
Once out of the wood the views were once again spectacular with cliffs to our right which looked like a long drop.
We were now walking down a steep hill through rocks and drops to the side.
Ahead in the distance was the Inn we were staying at that night.
Martin’s feet were hurting badly and I was having trouble lifting my leg.
After what seemed hours we made it to the inn and sat on our beds.
We took our boots off and realised we both had problems.
The blisters on my toes were twice the size they were in the morning.
I opened my first aid kit and went into the bathroom and lanced them with a safety pin.
Martin had a blister the size of an egg which had burst and others had developed and some were bleeding.
We sat on our beds applying blister plasters, I think I used about 5 on each foot.
Martin pulled out the map and we looked at the next day’s walk.
Most days we covered about 3 pages of the map the next day’s walk was over 4 pages and the terrain was the same as we had walked through all afternoon.
​We worked out that it would take a minimum of 10 hours.
Neither of us wanted to call a halt to the walk but realised that after a couple of hours walking there was no way back and would have to carry on to that night’s accommodation which was miles from anywhere.
We went to eat, whilst we came up with reasons to carry on or go home. In the end, we decided that the sensible thing was to head home.

After recovering from our various injuries Martin & I decided to carry on with the walk
Martin managed to book accommodation.
We decided to go by train from Milton Keynes Central to Haltwhistle via Carlisle, then bus to Once Brewed on the 13th of July.
Our Bergan's were transported so we only carried small backpacks which made the walk a lot easier.
Day 4  14th of July
18.2 miles
Time 9 hrs, 22 min
Steps 45,593
From Once Brewed to Sandysike House, Walton, Brampton 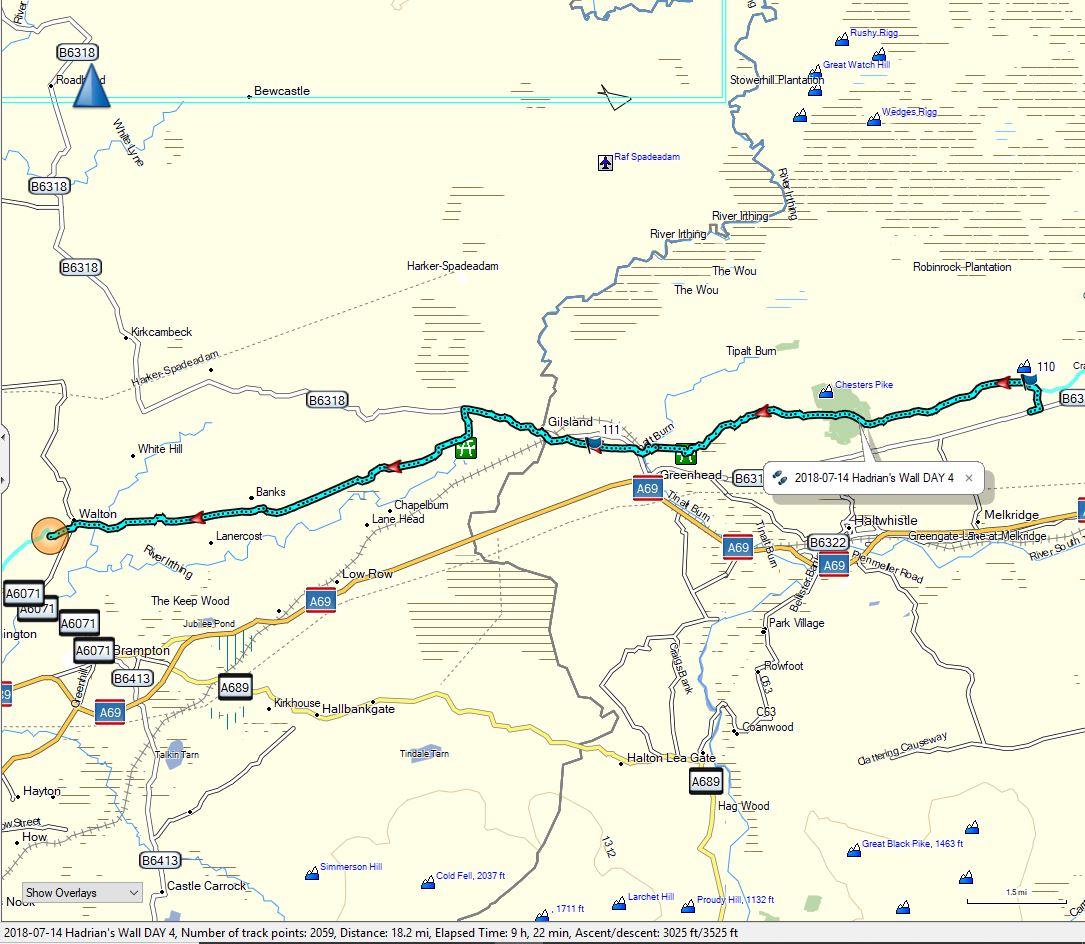 Day 4 of our trek proved us correct in stopping when we sustained the injuries in June.
After a rather large English Breakfast, I huffed and puffed my way to the top of a hill which bought us back to where we had abandoned the walk.
The terrain was a lot harder than we expected, with steep climbs and drops which meant climbing down stones set in the hillside.
We were lucky with the weather as it was ideal for walking in the hills in T-Shirts.
The highlight of our day was when we crossed from Northumberland into Cumberland as we felt we had really made some progress
​We had to keep up a good pace as we had to be at the accommodation by 20:00 hrs and made it with time to spare.
​By the end of the day, we were really hot and glad to get to the bunkhouse for a good nights rest.
Day 5  15th of July
12.4 miles
Time 5 hrs, 16 min
Steps 36,231
From Sandysike House, Walton, Brampton To Carlisle City Hostel, Carlisle 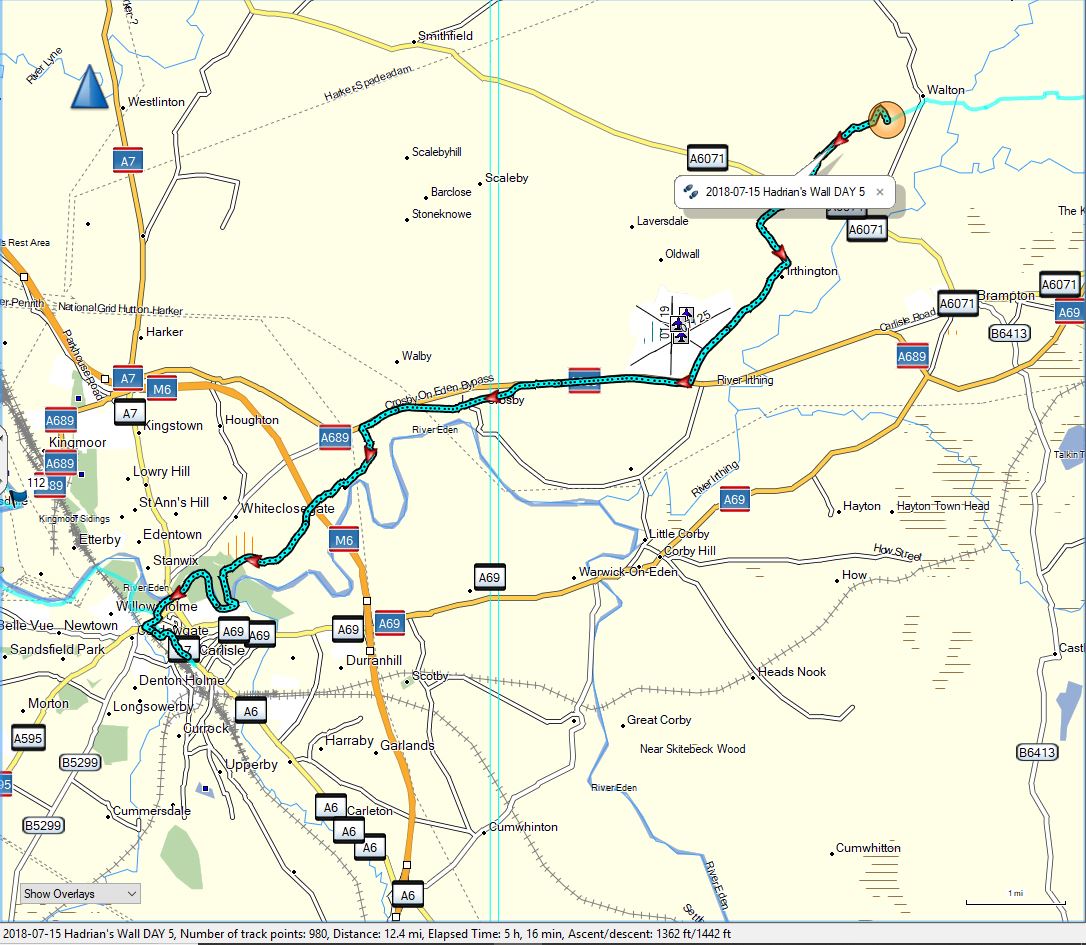 Day 5 was a shorter walk due to covering so much ground the previous day.
The ground was flat most of the way.
We were still walking through lovely countryside but feeling more relaxed we had plenty of time to cover the distance.
Once in Carlisle, we found our Hostel for the night and headed off to the pub for a well-earned pint (or two).
Day 6  16th of July
17.5 miles
Time 8 hrs, 30 min
Steps 39,866
From Carlisle City Hostel, Carlisle to Bowness on Solway 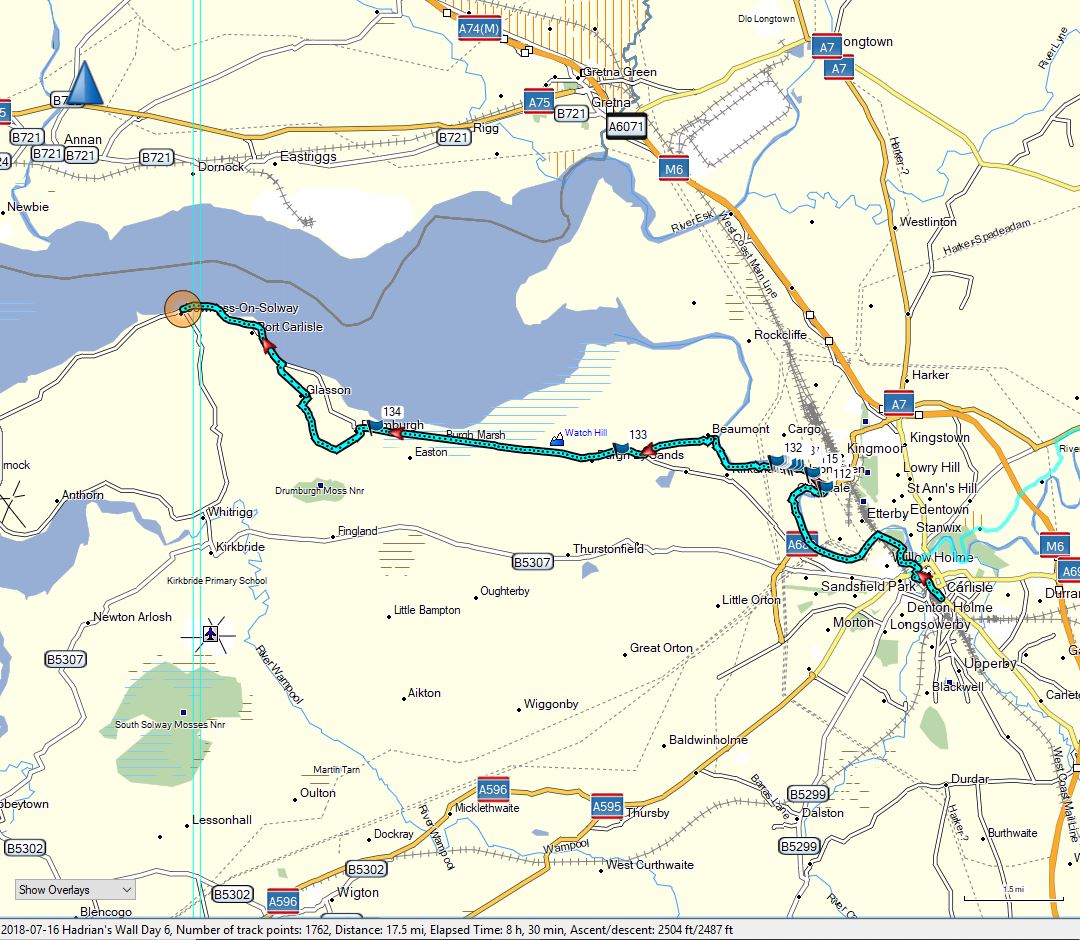 Day 6 was again over flat ground, however, the day was hot with the occasional shower.
We walked for about an hour after leaving Carlisle then could not find the path so ended up walking through fields following the river.
After some time we found the path again, but there was a sign saying the path was closed due to landslips.
We had no choice but to carry on as there was no way back without retracing our steps for a couple of hours.
At one point we were on an overgrown path above the river with gorse bushes which were catching our skin.
Martin managed to get across a bit of missing path but I couldn't find anywhere to place my foot.
I went for it and Martin grabbed my arm before I went over the edge.
After some distance, we found our way back to the path which followed the road.
The rest of the day was spent walking along flat ground seeing where we were heading in the far distance which seemed relentless.
After what seemed like hours the path left the river and we started walking through fields again.
It was an amazing feeling to see the Bowness on Solway sign which meant we had completed our challenge.

We had walked almost 100 miles met some fantastic people on the way and most importantly remained friends.
That night we had a couple of beers then headed off to bed for a good sleep.
Next morning we caught the bus back to Carlisle and the train to Milton Keynes.

We have our next walk in mind, but that's for next year! 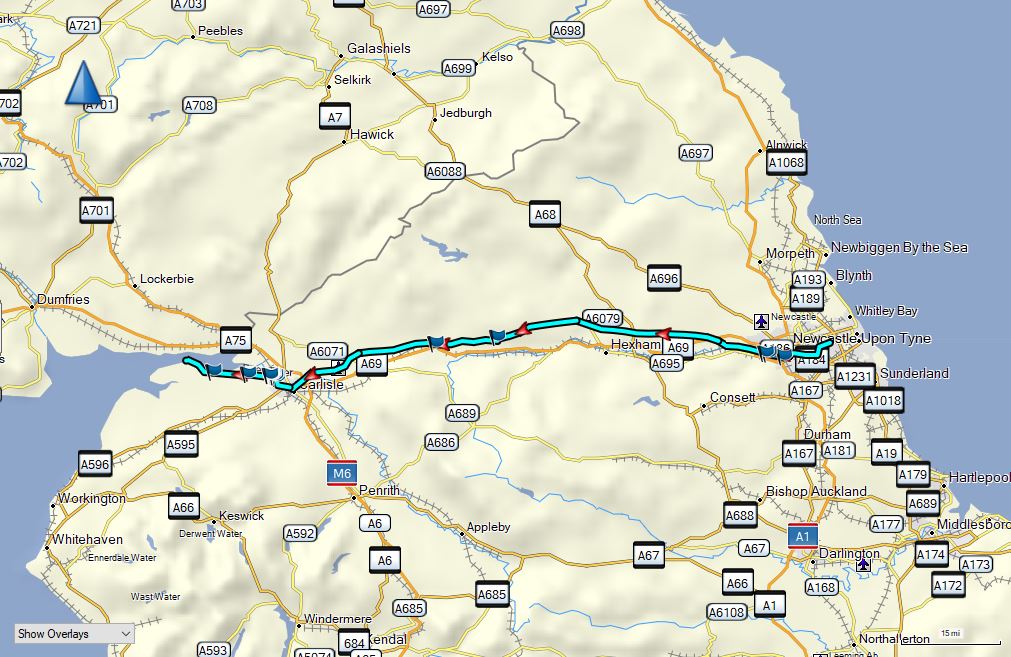